To share your memory on the wall of Thomas Greer, sign in using one of the following options:

After graduating from Iraan High School in 1957, Tommy joined the United States Army at age 17. Once he was honorably discharged, he went on what he called his college tour. He attended Texas A&M, Angelo College, Odessa College and Sul Ross. Tommy then worked in the oil field for the next 30 years. He worked as a diesel mechanic across Texas, New Mexico, and Oklahoma. After an oil field accident, Tommy returned to Sul Ross State University earning a bachelor’s degree and master’s degree. He then started his second career as a counselor/caseworker at Texas Youth Commission. At TYC, Tommy positively impacted incarcerated youth and forged close friendships with his co-workers.

Tommy loved his hometown of Sheffield. He will be remembered for his generosity, his funny stories, and his laughter.

Graveside services will be led by Pastor Eric Bayer on Monday, August 3, 2020, at 9:00 am at the Sheffield Cemetery under the direction of Shaffer- Nichols Funeral Home. Pallbearers are Tommy’s nephews.

To send flowers to the family or plant a tree in memory of Thomas Randal Greer, please visit our Heartfelt Sympathies Store.

Receive notifications about information and event scheduling for Thomas

We encourage you to share your most beloved memories of Thomas here, so that the family and other loved ones can always see it. You can upload cherished photographs, or share your favorite stories, and can even comment on those shared by others. 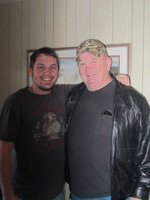