To share your memory on the wall of Steve Hooper, sign in using one of the following options:

To send flowers to the family or plant a tree in memory of Steve Alan Hooper, please visit our Heartfelt Sympathies Store.

Receive notifications about information and event scheduling for Steve

We encourage you to share your most beloved memories of Steve here, so that the family and other loved ones can always see it. You can upload cherished photographs, or share your favorite stories, and can even comment on those shared by others.

Posted Mar 26, 2021 at 02:25am
I am deeply saddened by Steve's passing. I have fond memories of the many good, and sometimes crazy, times we shared while growing up in Crane, and will always consider him as a good friend. He was a unique, witty, and talented individual. My sympathy and condolences to his family and friends. Kenneth Wayne Howell.
Comment Share
Share via:
BK

Posted Mar 24, 2021 at 06:02pm
Please accept our most heartfelt sympathies for your loss... Our thoughts are with you and your family during this difficult time.

Bright and Beautiful Spray was purchased for the family of Steve Hooper. Send Flowers

Posted Mar 24, 2021 at 11:58am
We send our heartfelt sympathy from Ohio upon learning of cousin, Steve's passing. He always knew how to put a smile on your face. May God abide.

Posted Mar 23, 2021 at 05:50pm
My condolences to Steve's family. Steve and I lost touch after high school, but we sure had some good times growing up. He was definitely one of a kind. Sincerely, Steve Johnson
Comment Share
Share via: 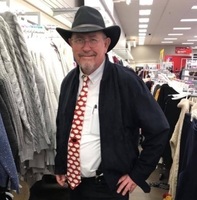