To share your memory on the wall of Pete Sarabia, sign in using one of the following options:

Rosary will be said at 7:00 pm on Monday, September 7, 2020, at the Shaffer-Nichols Funeral Home Chapel in Crane. Funeral Mass will be held at 10:00 am on Tuesday, September 8, 2020, at the Good Shepherd Catholic Church with burial to follow in the Crane County Cemetery.

Pete was born on September 29, 1949, in Pecos, Texas. He proudly served in the United States Marine Corp and was in the Vietnam War. Pete had lived in Crane since 1973. He worked for Trey Trucks driving a kill truck and was truly a hard worker that enjoyed his job. He loved watching westerns on television, and he was a Catholic.

Pete was preceded in death by parents, Pedro and Maria Sarabia; and a sister, Irma Rubio.

To send flowers to the family or plant a tree in memory of Pete "Cracker" Sarabia Jr., please visit our Heartfelt Sympathies Store.

Receive notifications about information and event scheduling for Pete

We encourage you to share your most beloved memories of Pete here, so that the family and other loved ones can always see it. You can upload cherished photographs, or share your favorite stories, and can even comment on those shared by others. 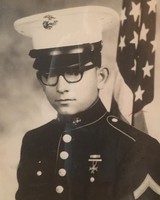