To share your memory on the wall of Peggy Garner, sign in using one of the following options:

Peggy Garner was born May 11, 1930 in Bonham, Texas to Howard Holland Dossey and Euna Flossye Gatlin Dossey. The family moved to McCamey so that Peggy’s father could work in the oilfield. She graduated from McC... Read More
Peggy Sue Dossey Garner

Peggy Garner was born May 11, 1930 in Bonham, Texas to Howard Holland Dossey and Euna Flossye Gatlin Dossey. The family moved to McCamey so that Peggy’s father could work in the oilfield. She graduated from McCamey High School and married her hero, Jack Marvin Garner from Rankin on February 17, 1947. The couple had three children John Howard (Rusty), Katie Elissa, and Susijac.

Peggy was very ambitious and earned many honors. She started out working as the Executive Director of the Chamber of Commerce. Next Peggy served as the Center Director for the Upton-Reagan Community Center and Upton County Day Care Center.

She then decided to run for County Judge of Upton County. She won the election and stayed in office for 16 years. During that time, she won many awards such as Man of the Year in Texas Agriculture in 1985, Region 6; Official of the Year, West Texas County Judges for 1982, and the First Lady of McCamey in 1975. She won many other awards and appointments.

Peggy loved the Methodist Church, the Permian Basin Historical Society, and the Permian Basin Regional Planning Commission. She was very active in numerous clubs and organizations.
In 1990, Peggy received her greatest honor. She was appointed to the Texas Water Commission by Governor Ann Richards. Peggy served on the Texas Water Commission in Austin, Texas until August 31, 1993.
Peggy had some other great qualities. She was a true leader. She was very generous and kind to everyone. Peggy did many things for the people in Upton County, and she will be remembered.

Peggy and her husband Jack enjoyed traveling and took many trips abroad. They, also, loved going to Ruidoso to the horse races. Most of all, Peggy and Jack loved to be around their grandchildren: Rowdy Bolen, Clay Garner, Chancy Bolen Allen, Kesha Garner Smith, Craig Hopper, Chase Settle, Cherokee Bolen Strube, Quisto Settle, and Golden Bolen.

Graveside services will be held at 2:00 pm on Sunday, November 1, 2020, at the Resthaven Cemetery in McCamey with Reverend John Lee officiating. Arrangements are under the care of Shaffer-Nichols Funeral Home.
Read Less

To send flowers to the family or plant a tree in memory of Peggy Garner, please visit our Heartfelt Sympathies Store.

Receive notifications about information and event scheduling for Peggy

We encourage you to share your most beloved memories of Peggy here, so that the family and other loved ones can always see it. You can upload cherished photographs, or share your favorite stories, and can even comment on those shared by others.

Felicia, Tommy & Barbara Powell, Gay & Clyde Grauke & family and Don McLaughlin, and other have sent flowers to the family of Peggy Garner.
Show you care by sending flowers

3 trees were planted in the memory of Peggy Garner

Posted Nov 02, 2020 at 10:08pm
Katie is one of my best friends so I was always eat here Birthday parties. Peggy always made ice cream cake. It was always delicious. I spent hours playing at her house. Peggy always watching over us. She was a great mom! Prayers for you, Rusty, Katie, and Suziejak
Love,
Kathryn Luckenbach Burch

Flowers were purchased for the family of Peggy Garner. Send Flowers

Posted Oct 30, 2020 at 06:05pm
My husband, John Midkiff and I were old friends of Peggy and Jack. Love and God’s blessings to her family as you go through this difficult time. I have happy memories of our times together.
Comment Share
Share via:
FP

Posted Oct 30, 2020 at 03:43pm
Wishing you peace to bring comfort, courage to face the days ahead and loving memories to forever hold in your hearts. Keeping you in our prayers. 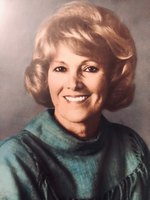