To share your memory on the wall of Natalia Juarez, sign in using one of the following options:

Print
Natalia Trujillo Ramirez Juarez, 95, died peacefully in her home in McCamey Texas, surrounded by her children, grand-children and great-grandchildren on August 8, 2020.

Natalia was born on December 8, 1924 in Acuna Coahuila Mexico to Tir... Read More
Natalia Trujillo Ramirez Juarez, 95, died peacefully in her home in McCamey Texas, surrounded by her children, grand-children and great-grandchildren on August 8, 2020.

Natalia was born on December 8, 1924 in Acuna Coahuila Mexico to Tirso and Maria Trujillo. She married Genovebo Juarez on November 16, 1942 in Tlahualilo Durango Mexico. They came to the United States in September 22, 1952 to Menard Texas. They moved and briefly lived in Big Spring Texas, and finally settled in McCamey Texas.

While one of the most significant milestones was when she gave her life to Jesus Christ in 1958, Natalia always embodied the Proverbs 31 woman. She would rise early in the morning to work the farm with her husband, and helped him raise the herd of cattle and nine children. She was resourceful in every facet of her life. One example is she would make her children's clothing, in the most recent Sear's fashion, made of the finest flour sacks. One of the greatest gifts she gave her children was accessibility to the Word of God. She would write scriptures on pieces of paper and place them at eye-level in the bathroom, kitchen, and bedroom so her and her household would memorize the Bible. She taught her children the fear of the Lord, not only by the belt (and there are many stories of those lessons), but she lived by example.

Natalia was known as a very kind and giving woman. While she was still able, she would go visit and feed the sick in McCamey. Her daughter Engracia remembers when they lived in Acuna, Natalia would give food to the poor, and her children remember sharing breakfast with immigrants who would pass through town. Even though she never spoke ill of anyone, she was straight forward and was quick to let you know if you were not Christlike. It is important to share that outside of her faith, she was a confident and vivacious woman who never stopped living. She earned her driver's license at 65, note the word earned. Natalia Juarez' worth was far beyond rubies and all of her children rise and call her blessed.

The family would like to thank Dr. Addison, the staff at McCamey Hospital, the Rural Health Clinic, and Home Hospice for the tender care they gave, as well as the many friends and extended family for their support.

Graveside services will be held at 10:00 am on Tuesday, August 11, 2020, at 10:00 am in the Resthaven Cemetery with Pastors Bacillio Montes and Ray Salgado officiating. Arrangements are under the care of Shaffer-Nichols Funeral Home.
Read Less

To send flowers to the family or plant a tree in memory of Natalia Juarez, please visit our Heartfelt Sympathies Store.

Receive notifications about information and event scheduling for Natalia

We encourage you to share your most beloved memories of Natalia here, so that the family and other loved ones can always see it. You can upload cherished photographs, or share your favorite stories, and can even comment on those shared by others.

Rosemary Trevino Flores and RWE Family sent flowers to the family of Natalia Juarez.
Show you care by sending flowers

Flowers were purchased for the family of Natalia Juarez. Send Flowers 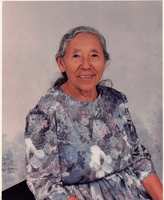