To share your memory on the wall of Miguel Mendoza, sign in using one of the following options:

His kind eyes, broad smile and zest for life caught the eye of Miss Laura Ibarra in 1989. After a whirlwind romance they married on June 28, 1990, in Iraan. Together they welcomed three daughters and one son.

Michael was a Christian, a devoted family man, a loyal friend and a hard-working dyed in the wool vaquero. Outside of his family, his life’s passions were ranching and dancing. In fact, if you knew Michael chances are you once worked alongside him. It didn’t matter what the job was, Michael would be there honest, willing, able to help and good humored even if things went a little south. Michael will surely be remembered for his jovial personality. He was so much fun to be around that he could make anyone feel like a kid again. His quick wit branded hearts with unending, unforgettable friendships.

The greatest labor of Michael’s life was his family. Working alongside Michael Sean, or “Pelon” as he often referred to him, undoubtedly made him proud to be raising his own cowboy. Yessenia, the eldest child, spent her fair share of time working and learning alongside her father too. She later taught Michael a new kind of love- the love of being a grandfather. As a grandfather, Michael became PaPaw to Yessenia’s three children. Miranda expanded on his PaPaw duties with five more grandchildren. Naylea, the youngest was Michael’s very own princess. He delighted in watching her pursue her athletic endeavors and he was very proud of the young woman she is becoming. Michael greatly loved all of his children and he adored his grandchildren.

Michael’s great love for family and friends was always on display. He was quick to give his very best to everyone. And everyone’s heart it seems had a place for Michael.

Services will be held Wednesday October 30, at 3 pm in the Iraan Civic Center. Graveside services to follow.

“For I am convinced that neither death nor life, neither angels or demons, neither the present nor the future, nor any powers, neither height nor depth, nor anything else in all creation, will be able to separate us from the love of God that is in Christ Jesus our Lord.” Romans 8:38-39
Read Less

To send flowers to the family or plant a tree in memory of Miguel Sanchez Mendoza, please visit our Heartfelt Sympathies Store.

Receive notifications about information and event scheduling for Miguel

We encourage you to share your most beloved memories of Miguel here, so that the family and other loved ones can always see it. You can upload cherished photographs, or share your favorite stories, and can even comment on those shared by others.

Wyn and Dyna king, Amalia Rendon (morales) & Yolanda Garcia ( morales, and other have sent flowers to the family of Miguel Sanchez Mendoza.
Show you care by sending flowers

Posted Oct 30, 2019 at 05:59pm
After a very long and hard day, Michael would take time to drop by and say hello and ask how Wendell and I were doing. He was never too tired to take Laura out dancing. Michael loved his family so much and he was also loved by many. We will miss him.
Comment Share
Share via:
WK

Wyn and Dyna king purchased the Sentiments of Serenity Spray for the family of Miguel Mendoza. Send Flowers

Flowers were purchased for the family of Miguel Mendoza. Send Flowers

Posted Oct 29, 2019 at 05:04pm
Our most sincere condolences to the Mendoza Family. As you grieve know that we are remembering you in our prayers. 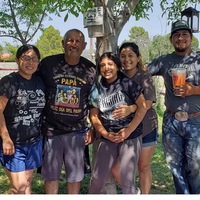