To share your memory on the wall of Gonzalo Luis Valdez, sign in using one of the following options:

Print
Gonzalo Luis Alberto Villagran Valdez, more known by Beto with family and friends and Luis by those he worked with, went to be with our Lord and Savior on the afternoon of April 23, 2020.

He was born on January 10, 1980, to his father Lu... Read More
Gonzalo Luis Alberto Villagran Valdez, more known by Beto with family and friends and Luis by those he worked with, went to be with our Lord and Savior on the afternoon of April 23, 2020.

He was born on January 10, 1980, to his father Luis Valdez and mother Pascuala Villagran in Toluca, Mexico. He came to America in 2003 to Lawrence, KS and worked odd jobs and in restaurants.

Beto met the love of his life, Paula on July 16, 2003. They married January 9, 2009. They moved to Crane, TX where they raised their boys and he worked hard doing framing and other handyman jobs for family and friends. Beto then went to work for West Texas Dirt Movers.
He was a huge Green Bay Packers fan. He loved family time and watching his kids at all the sports they played. He helped raise many children that was not his own. He was a father to all and a great friend to many. He will be greatly missed.

He was preceded in death by his mother, Pascuala Villagran, and a brother, Alfredo Valdez.

Memorial services will be held at 10am on Saturday, June 13, 2020, at the First United Methodist Church in Crane.
Read Less

To send flowers to the family or plant a tree in memory of Gonzalo Luis Alberto "Beto" Valdez, please visit our Heartfelt Sympathies Store.

Receive notifications about information and event scheduling for Gonzalo Luis

We encourage you to share your most beloved memories of Gonzalo Luis here, so that the family and other loved ones can always see it. You can upload cherished photographs, or share your favorite stories, and can even comment on those shared by others. 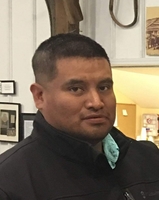