To share your memory on the wall of Dan Riggs, sign in using one of the following options:

After graduating from Del Rio High School in 1946, Dan became a noted and hard working river rider dispatched from the Del Rio Sector, before serving in the Korean War. In 1956 Dan began ranching in Terrell County and later into Crockett County. He raised sheep, goats, cattle and horses. Never one to be complacent he learned to AI cattle in the 1980's, advancing not only his herd, but aided family and friends by sharing his skill for their herds as well.

Dan and his wife, Kathleen, known to all as "Sister", were ever present figures and supporters, to nearly every rodeo within a 1,000 miles, for many years. As a competitor, Dan never held back in any competition where there was money up...he always rode to win, for himself, his horse or any partner behind him. And win he did!!! He was generous with his winnings, in tithes, offerings and trophies, even sending a prized buckle to Russia in support of Christian Sharing. In prayerful hopes, it would give inspiration to someone seeking Jesus.

Having been the son of Texas Ranger and Deputy U.S. Marshall, Walter Ed Riggs, and a God fearing Mother, Mildred Riggs, he got the best of all that was good and noble in his upbringing. He was taught how to turn his hand to any kind of work and to walk confidently in Christian Faith and to do it all on a daily basis.

He was preceded in death by his beloved wife, "Sister", his parents, brothers, Jack Riggs, of Ozona, and Jim Riggs, of Ruidoso, New Mexico.

"Dan Riggs, a Man to Ride the River With"
Read Less

To send flowers to the family or plant a tree in memory of Dan Clarence Riggs, please visit our Heartfelt Sympathies Store.

Receive notifications about information and event scheduling for Dan

We encourage you to share your most beloved memories of Dan here, so that the family and other loved ones can always see it. You can upload cherished photographs, or share your favorite stories, and can even comment on those shared by others. 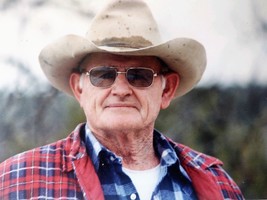