To share your memory on the wall of Carl Rice, sign in using one of the following options:

Print
A longtime resident of McCamey, Carl Rice, 66, died Friday, August 14, from injuries sustained in an automobile accident on Highway 385 south of Crane. A native of Pennsylvania, Rice was a longtime employee of Cooper Construction.

Born o... Read More
A longtime resident of McCamey, Carl Rice, 66, died Friday, August 14, from injuries sustained in an automobile accident on Highway 385 south of Crane. A native of Pennsylvania, Rice was a longtime employee of Cooper Construction.

Born on November 24, 1953, in Susquehanna, PA, he graduated from Susquehanna Community School. He later married a young woman named Bonnie, whom he met in Susquehanna. The couple moved to McCamey in 1982 and Rice started employment on March 1 with Cooper Construction as a project foreman on a McCamey school addition.

In 1990, he was promoted to project superintendent. For the next 30 years, until his death, Rice supervised construction of more than 50 projects throughout West Texas, including Trinity School of Midland, Reeves County Hospital District, numerous school additions for Ector County ISD, Rankin High School, prisons, Midland Memorial Hospital, Permian Basin Petroleum Museum, Medical Center Hospital Center for Health and Wellness, Sul Ross State University and UTPB. At the time of his death, Rice had completed the Vascular Center of the Permian Basin. The quality of his leadership is reflected in awards for architecture and LEED construction.

He was known for his quiet personality and low-key leadership style, and for doing anything for anyone. Rice enjoyed spending free time at his McCamey shop working on many projects, grilling outdoors for friends, and growing hot peppers in his garden.

Rice was pre-deceased by Lawrence and Betty Rice.

Survivors include his wife, Bonnie; his son, Carl Rice, Jr. and partner, Michele; brothers-in-law Wayne Heath and Terry Heath; a sister-in-law, Tammy; a niece, Sara; and nephews Brett, Brian, Adam, Matt and Tyler; and many great friends. As Carl would say, “You know who you are.”

The family suggests making a donation to the charity of your choice in lieu of flowers.

To send flowers to the family or plant a tree in memory of Carl Allen Rice Sr., please visit our Heartfelt Sympathies Store.

Receive notifications about information and event scheduling for Carl

We encourage you to share your most beloved memories of Carl here, so that the family and other loved ones can always see it. You can upload cherished photographs, or share your favorite stories, and can even comment on those shared by others. 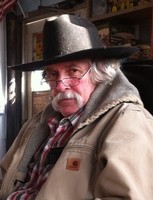