To share your memory on the wall of Bobby Williams, sign in using one of the following options:

Bobby was born in Antlers, Oklahoma, to Loyce Lee and Ida Mae Oliver Williams on March 17, 1937. He grew up and attended school in Antlers until 1955. Following his 18th birthday, he enlisted in The Navy where he was eventually assigned to the destroyer, The USS Blue. He served there until he was released from active duty in May 1959. He then served 4 years of inactive duty and was honorably discharged in May, 1963. Upon his release, he made his way to family members in Hobbs, NM, where he found work in the Lea County oilfields. In 1961 he began working as a salesman for a bread company and found he was well suited to that line of work. He worked in wholesale food sales for 38 years where he earned many sales awards, was transferred many times due to his business building skills and received a safe driving ring for his years of service without an accident. He retired from Frito-Lay, Inc. in McCamey, TX 1999.

Bobby was honored and pleased to serve on The McCamey ISD Board for 15 years where his focus was on providing the students with a top quality education by hiring the best administrators, coaches, and teachers available and providing them with the best working conditions and salaries the district could afford.

Bobby grew up attending Sunday school and at the age of 28 determined to totally commit his life to following and serving Jesus Christ as his Lord and Savior. At various times in various churches for the following 40 years he served his local church as treasurer, usher, greeter, bus driver, deacon and Sunday school teacher's assistant, but the work dearest to him was the Royal Ranger Program where boys of all ages were taught the Bible and Biblical principles for Christian living and enjoyed mastering crafts and the fun of camping and attending the annual Pow-Wow.

Bobby was a kind, generous, loving man who always had candy and gum in his pockets for everyone, especially children. He never met a stranger, enjoyed telling corny jokes that made others laugh anyway. He also loved giving a hug to all who would let him. Bobby enjoyed supporting students’ efforts by attending their activities and was frequently at practice sessions and almost always at their games and competitions. He also loved "helping" Santa Claus visit McCamey Primary School. He also loved a rowdy, rousing game of forty-two, rummy, monopoly and others with neighbors, friends and family and delighted in cheating. He delighted more when his children caught him at it.

Bobby met his bride-to-be at a casual dinner party in Hobbs, NM where they passed the evening playing Old Maid with her sisters and brother. After a whirlwind courtship, they married in early 1960 at the First Assembly of God Church in Eunice, NM and were together for more than 60 years. His priorities in life were his walk with God, his family and friends, his employment and his church. He thoroughly enjoyed returning to Antlers in June to visit family, old friends, and participate in the annual Homecoming and class reunions. Another priority was attending the annual USS Blue Reunions in September where all the sailors who had ever served on The Blue felt like family to him.

Bobby is survived by his wife, Wanda, son, Alan and wife Tami Jo of Houston, and daughter, Brenda Thurman of Frisco; three granddaughters, Amber Williams and companion, Travis Mize of Alvarado, Morgan Rhoden and companion Damen Wood of Denton, and Alexis Harrelson and husband Kyle of Mountain Home, AR.; one great granddaughter, Autumn of Alvarado and one great grandson, Ripley of Mountain Home. He is also survived by two granddaughters by marriage, Casi and Sandra Casparis and five great grandsons by marriage, Jacobi and Wyatt Genn, Garret Rhoden, Elijah Helton and Jaxon Casparis, four sisters, Mary Jo Swanson, Mary Dean Carter, Debbie Kleis, and Judy Fox, three brothers-in-law and three sisters-in-law H.B. Bishop and wife Kay, Lawrence Alford and wife Nevell, and David Brasted and wife, Peggy as well as nieces, nephews and cousins.
In addition to his parents, Bobby was preceded in death by five sisters, one brother and their spouses.

To send flowers to the family or plant a tree in memory of Bobby Gene Williams, please visit our Heartfelt Sympathies Store.

Receive notifications about information and event scheduling for Bobby

We encourage you to share your most beloved memories of Bobby here, so that the family and other loved ones can always see it. You can upload cherished photographs, or share your favorite stories, and can even comment on those shared by others.

Flowers were purchased for the family of Bobby Williams. Send Flowers

Posted Jul 24, 2020 at 02:22pm
He was a precious man! I knew he loved me, even when I didn't see very often in the last 30 years. He was full of life and always joyful. He is finally living his dream for eternity. I am sending my love to Wanda, Alan and Brenda!
Comment Share
Share via:
BT

Lovely. Just like you. Thank you for sharing your memory of him with us. Sending our love to you too! 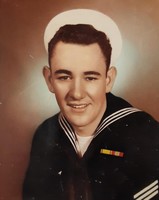