To share your memory on the wall of Alfred Bowman, sign in using one of the following options:

Services are entrusted to Shaffer-Nichols Funeral Home and will be held graveside (guests along the outer fence please) at Imperial Cemetery in Imperial Texas on Wednesday, July 8, 2020 at 10:00 am with Pastor Scott Owens officiating.

The Man
To be in that Monahans Texas hospital room on September 14, 1949 you would have shared the joy. Edith and Leslie Bowman named their new son Alfred Graham Bowman. The only boy born into a bouquet of three sisters. “The more sisters the better,” Graham once explained, “I get more roping practice that way.”
To follow that young family back to their home in Imperial Texas was to enjoin a special group during a special time in West Texas history. Further, to be a friend to that Bowman clan was to peek inside a remarkable family. The mom, Edith, came to define what it meant to be a wife, mother, support, and godly woman. She never wanted anything other. The dad, Leslie, grew to be one of the most respected men in the state and was legendary in his stature and character both as a man, a farmer/rancher and a county commissioner.
Graham didn't try to follow his dad but was his own man. The boots and hat he wore were his to define. From boyhood Graham loved horses. He always had his own mount and could sit a horse like all the larger than life characters he grew up with. Men like George Brown, Lynn Freeman, Slim Heflin, and Buck McGonagill.
Graham was a hand and was a natural at working cattle. He was a hard worker. He didn’t have a choice because there was hay to buck, stock to feed, calves to work, and water troughs to repair. All that was after the school’s coaches of football, basketball and track had their way each day. Graham was a big man, a handsome guy, barrel chested and often gregarious. He could be loud and sometimes rival a bull in a china closet but make no mistake - he was a bull and he was not afraid to venture delicately into plying his manly charms towards engaging and conquering the opposite sex.
The only thing that rivaled a good horse and a pretty woman in Graham’s eyes, was a perfectly cooked steak. Did that man like steak! Preferably cooked rare. In fact, his frequent stops at the Steak House in Ft. Stockton likely caused him to lose both his waistline and his heart early on. Yes, that pretty young Cope girl working there was the only one who ever found a way to corral his heart. Tara’s beautiful rope continued headn ‘n heeling Grahambo for the next 42 years of marriage.
Graham was a family man, sharing parenting and grandparenting delights with Tara as they raised Courtney and Blake, while also spoiling five grandchildren. Graham liked the home setting and was pretty much a stay at home sort. What moved him to give up his easy chair was any event or activity the kids were involved in. From school sports with Blake and Courtney, to the school rodeo circuit, Graham was there for his kids always. He loved them and showed his love by what he did. Broader travel didn’t interest Graham that much, in fact except for a stint in the military he never strayed too far from his regional home roost. He probably would never have travelled to Germany had not the military lottery drawn his birthdate as Number 1. That government document powered him out of Sul Ross like student deferrals weren’t invented. He never talked much of basic training or even the military mess. He did however convey many a story about the German, food, fun and frauleins.
Graham loved people, he loved fun, and he loved laughing. One could be around him for five minutes and detect his deep affection and enjoyment for engaging people. He had friends everywhere, and he made friends easily. He didn’t change to suit anybody else; conversely, they all came around to loving him for what and who he was – just as he was. Graham was never pretentious but straight up liked Jody Nix, not Lyle Lovett.
If records were being kept, Graham experienced more incidents and accidents in his life than twelve other men could muster. If he wasn’t late-night illegally driving through the international border crossing as a college boy, he was later bending his aging ribs over the metal pipes on a roping arena fence - courtesy of a half-broke bronc. He had more concussions than the doctors could count, along with shoulder and hip surgeries that kept the physicians busy.
Graham’s muddy boots reveal a busy man, an outdoorsman, a horseman, a sportsman, and a hunter. He hunted and was a guide most of his life. The family could always count on him to supply deer back-strap as a Christmas side. And he liked doing it.
What is not so obvious and here is a secret truth: Graham had a tender heart.
Yes, he always had a tender heart…a very tender heart. Oh he crusted it over at times with rough language and behavior but look closer and you’d see those big hands comforting, those big tears welling up. That’s right, tears coming from the tough big guy, with the big heart and the big laugh. All the while comforting in both Spanish and English, while showing off his prowess at waltzing.

Graham has now moved on to hunt new pastures and ride fresh stock. That sparkling new diesel rig with the fancy gooseneck came to pick him up on July 04, 2020. Look for him now at St. Peter’s Steakhouse near the corner of destiny and divine. He’ll be the one in the black hat tilted back just a bit. The one gesturing with his hands, smiling as he chats it up with family there.
Listen carefully now and you can hear his boisterous laughter echoing down the halls of heaven.
Better still, when your time comes, follow his muddy boot tracks and go there yourself.
Read Less

To send flowers to the family or plant a tree in memory of Alfred Graham Bowman, please visit our Heartfelt Sympathies Store.

Receive notifications about information and event scheduling for Alfred

We encourage you to share your most beloved memories of Alfred here, so that the family and other loved ones can always see it. You can upload cherished photographs, or share your favorite stories, and can even comment on those shared by others.

Bill and Brenda Littleton sent flowers to the family of Alfred Graham Bowman.
Show you care by sending flowers

Bill and Brenda Littleton purchased flowers and planted a memorial tree for the family of Alfred Bowman. Send Flowers 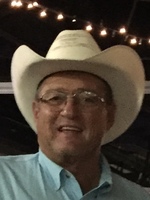